A Speakeasy with a 1920s Cuban Art Deco Theme

At 993 mission street in San Francisco, right next to Monarch, is a Pawn Shop.

It’s been there for as long as I can remember. Inside its glass-encased walls are the typical things you’d buy in a pawn shop…guitars, records, bowling balls. You get the picture. It’s a pawn shop.

And yes…this is your destination.

The Pawn Shop is a hidden tapas bar with a one-of-a-kind menu and an extensive wine list – created by the award-winning teams behind Beso, Monarch, and The Great Northern.

This was our adventure out of our usual haunts and The Pawn Shop is one of the most exciting and collectively creative environments I’ve ever been in that sells drinks and food.

She Tipped Us Off To…

A tip-off from a friend recommended got us out and into this speakeasy for their drinks and tapas. We were given the heads up, “It’s a pawn shop and the speakeasy is in the back”.

We arrived at 10:30 pm on a Friday night without a soul insight of the front of the pawn shop. However, the long lines of people at Monarch kept watching mysterious, random people disappearing into the entrance of this otherwise ordinary storefront.

We entered the small shop and were met by a pajama-clad woman minding the store. She wasn’t forthcoming about the nightclub. She seemed rather uninterested in our arrival.  I had a momentary concern that we were in the wrong place.

After about 90 seconds of unenthusiastic banter with her, I realized that I had to specifically ask about the club in the back. Then she gave us a small smile, and obliquely alluded to the club.

Oh..this was a game. Play acting. I’m great at this. So, play I did. My husband and brother-in-law know I’m a ham and I proceeded to game the system and
turn-the-key-in-the-lock…so to speak.

Just like a real speakeasy back in the day. You had to know someone or have a secret password. She then opened one of her glass display cabinets, pressed a button, and the cabinet opened up into a large, secret room of buzzing conviviality…and we were in The Pawn Shop.

Into the Secret Place

Entering was like gaining entrance into a 1920s Cuban club with happy people.

I saw bros in hoodies, women dressed-for-success, and some who were clearly celebrating one of their parties birthday. This group looked straight out of an LA investor’s portfolio.

One woman was dressed in a 1920s flapper outfit and she’d done a great job. She looked like an extra from the Great Gatsby.

And…people kept arriving and greeting each other..even at adjoining tables.  This was an enclave. Even the sophisticates at the LA table were greeted…and welcomed the greeting. 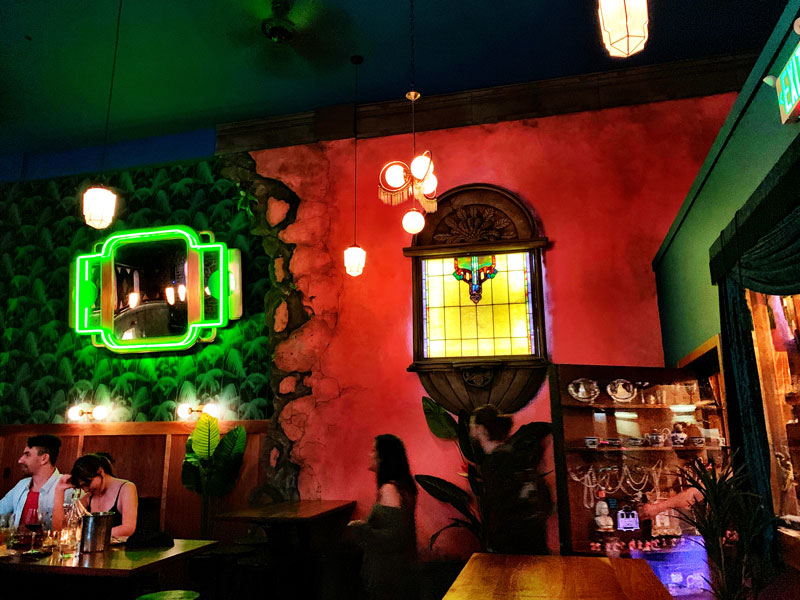 This was one of the most diverse, hip, and interesting scenes I’ve ever been in for a long time. After a while, I received a few acknowledging glances, too. Wow. I was a part of this now… just by knowing about it. Cool. I’ll take it.

It really was like discovering one of the last great mysteries of San Francisco.

A Place to Play

The Chef and owner, Nick, came by to greet us. He clearly didn’t recognize us and came to see how we were enjoying his place. Turns out he hired actors to man the pawn shop front and he asks them to play hard to get. Awww…what a great idea. When I asked what was his inspiration for the Cuban 1920 Art Deco theme, he said, “I wanted people to have a place to play because we are all just kids.” Indeed, I felt excited by what he’s created. 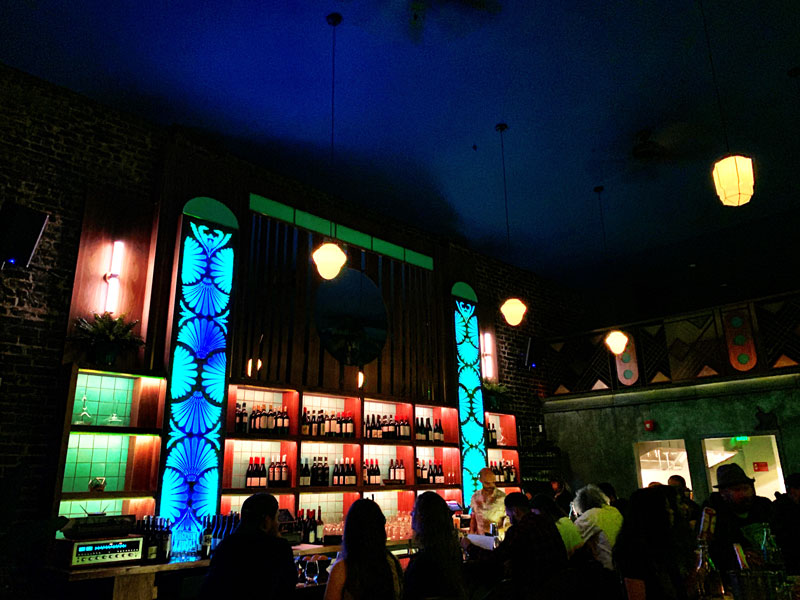 We found a table quickly and discovered Sangria on the menu. Yep, we got a carafe of this. The chopped up apple, pineapple, and oranges into their sangria. I’ve never had apples in my sangria before. It works. 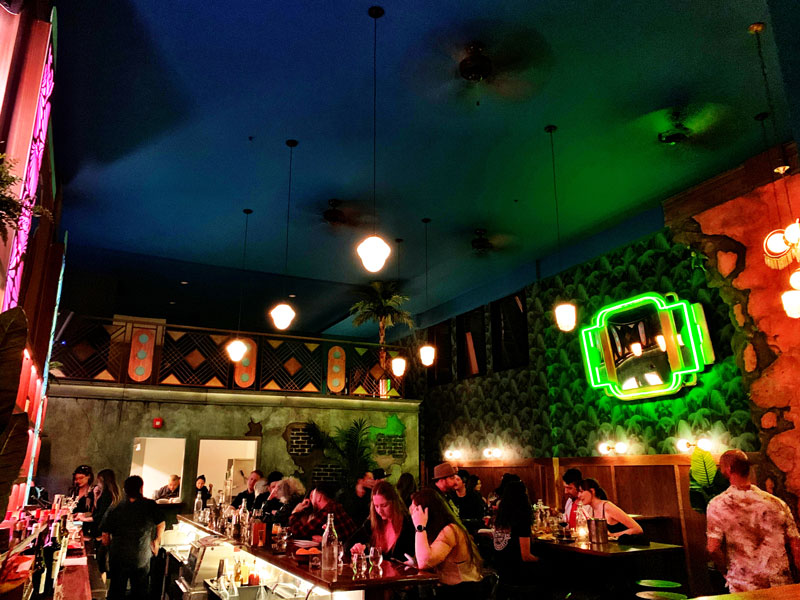 I ordered one of their tapas, the Bomba, which turns out is a delicately fried potato-covered meat pie shaped like a big ball and finished with a spicy swirl of sauce. 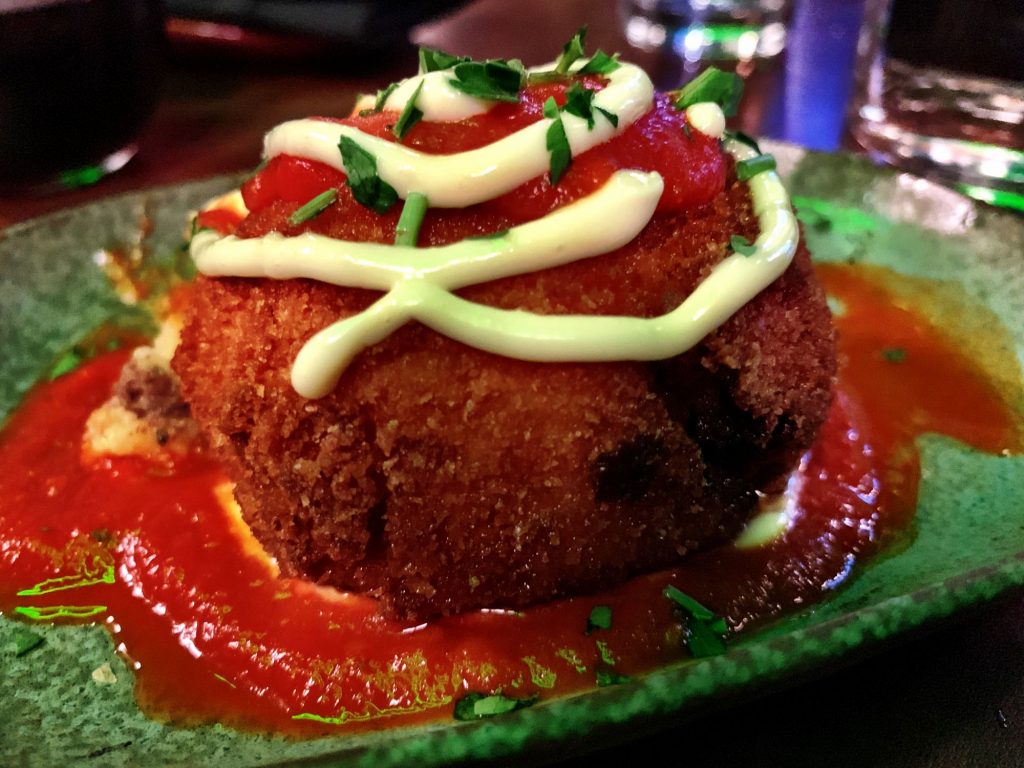 At the bottom of their wine list are the cocktails: Uno, Dos, and Tres.

Each was so interesting we decided to order one of each and share them around.
Yum. What a great idea!

Hands down, we liked Tres the best.

We haven’t been this excited about a place, and a community so randomly joined, ever!

The Pawn Shop is a still a “who-have-to-know-someone” place and gaining entrance will mark you as golden.

Come join us there and tell em’ Mr Product Reviews sent ya!